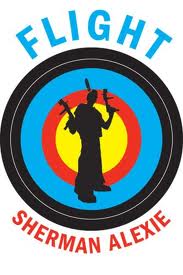 A fantastical and shocking rollercoaster of a novel, Flight by Sherman Alexie (2007) is the story of Zits, an orphaned young teen about to commit a horrendously violent crime. Just before he takes that final act, Zits begins a journey through time, inhabiting the bodies of people from very differnt walks of life: civil rights era FBI agent, Indian child during the Battle of Little Bighorn, contemporary airline pilot, old man, drunk... Each of these bodies has significance to Zits, but it is only once Zits returns to his real self that he learns what his journey was really about. A coming of age story, Flight is more than just the journey of this one young man, but about the journey for many adolescents experiencing conflict at home or in society.

While Zits experiences are specific to his life, the dreams/memories, flashbacks he experiences also tell the stories of many Americans. Each of the characters he inhabits has a lesson to teach Zits, but also a lesson for the reader about the human condition. Loneliness and the conflict of identity are major themes in this novel, and I would recommend that a teacher or adult suggesting it to a young adult to read also take the time to discuss some of the alluded to darker historical perspectives. This tone of this text reminded me more of Alexie's adult literature than his other young adult text, but I can see that this novel could be a valuable addition to a class with an eye toward historical and social analysis. A simple read, Flight is a book that was both enjoyable and at times painful to read. While there are no overtly violent or graphic scenes, Zits' loneliness and inner turmoil kept coming back again and again in my thoughts.

Reviews for Flight by Sherman Alexie (2007)
"Quiet, powerful...brilliant, deeply moving....[Sherman Alexie] is funny, he is perceptive, and he knows how to stir us in large and small ways." - The New York Times Book Review

"His first novel in over a decade, Sherman Alexie's Flight winds themes of alienation, revenge, and forgiveness through its narrator's time-traveling adventures. Critics were impressed with the clever Zits: his thoughts and actions are both humorous and painfully genuine, the essence of troubled adolescence..." - Bookmarks Magazine

"Billed as his first novel in 10 years, it is actually more of an extended riff, longer than a story but slighter, flightier, than a full-length novel. Was it perhaps meant as a young-adult book—a morality tale of a teenager battling issues of identity and history, alcoholism and acne, who, through some strange "back-to-the-future" fantasy trip, arrives at an understanding of himself and his country? Whatever it is—literary exercise, rapid-fire monologue, adolescent vision quest—it is nevertheless an often thrilling and surprising ride, and wholly Alexie." - The Village Voice